In this talk, discover the cases, both well-known and obscure, of leading 19th century forensic scientist Alfred Swaine Taylor (1806-1880). Along the way, find out about the contribution both he and his wife Caroline made to early photography, his interests in geology, and the development of forensic science as a specialism which grew in importance over the course of Taylor’s career.

Helen Barrell is a librarian at the University of Birmingham and an alumna. Her book Fatal Evidence: Professor Alfred Swaine Taylor and the Dawn of Forensic Science was the first full-length biography of Taylor, and was chosen as one of the Guardian’s Best Summer Books 2018. Barrell has appeared on BBC Radio 4’s Punt PI, has written for several magazines and has given talks at literary festivals and for local and family history groups. 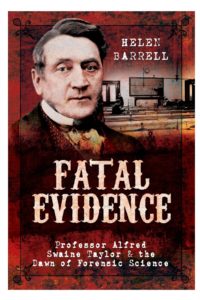