Charlie Flowers was born in Eastern Europe sometime in the late Sixties and arrived with his family in Britain in 1975. After training as a journalist in London he had a varied career as reporter, roadie, truck driver and record label boss. In the late Nineties he formed two cult bands, and is currently an adviser on terrorism and extremism to certain departments and think tanks.

He is the author of the Rizwan Sabir thriller series, recounting the adventures of MOD investigator Riz Sabir and his other half Holly “Bang-Bang” Kirpachi, and their run-ins with Islamist terrorists, far-right extremists, gangsters, serial killers, and much more besides.

The novels in the Riz series are: Hard Kill, Danger Close, Kill Order, Battle Come Down, Murder Most Rural, Banger, and The Boldest Measures.

Charlie is published by Endeavour Media and Black Dove Books.

Vaseem Khan is the author of the Baby Ganesh Detective Agency series, a ‘gritty cosy crime’ series based in Mumbai, India and featuring a baby elephant. The first book in the series The Unexpected Inheritance of Inspector Chopra was a Times bestseller, a Waterstones’ paperback of the year, and and an Amazon Best Debut. The second in the series The Perplexing Theft of the Jewel in the Crown won the 2017 Shamus Award for Best Original Private Investigator Paperback. The third was released in May 2017 – The Strange Disappearance of a Bollywood Star. His aim with the series is to take readers on a journey to the heart of modern India.

Vaseem first saw an elephant lumbering down the middle of the road in 1997 when he arrived in Mumbai to work as a management consultant. It was the most unusual sight he had ever encountered and served as the inspiration behind his series. Vaseem was born in London in 1973, studied finance at the London School of Economics, before spending a decade on the subcontinent. He returned to the UK in 2006 and has since worked at University College London for the Department of Security and Crime Science. Elephants are third on his list of passions, first and second being great literature and cricket, not always in that order. He also runs The Reading Elephant Bookclub.

Elizabeth Mundy graduated from Edinburgh University where she read English Literature, and now works as a marketing director for an investment company in London. But her grandmother was a Hungarian immigrant to America who raised five children on a chicken farm in Indiana. Elizabeth lives in Islington with her incredibly messy husband.

Her debut crime novel, In Strangers’ Houses, will be published by Constable in 2018. It introduces Lena Szarka, a Hungarian cleaner uncovering dirty secrets in London. 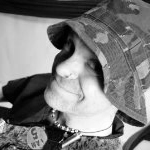